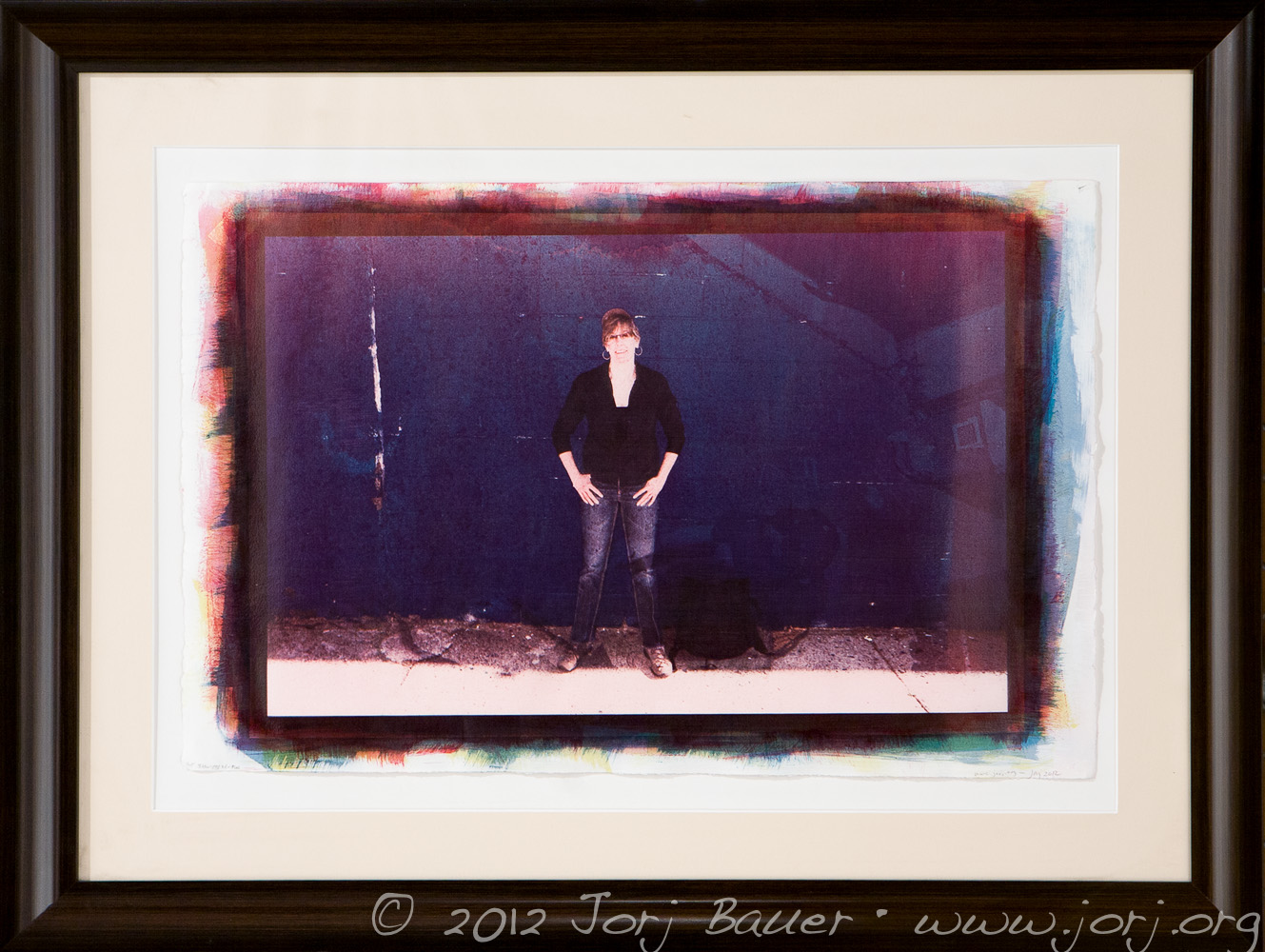 The Making of a Widow

This is the project that took up most of my 2012. And it’s what I wanted to post about repeatedly during the year, but my old blog software just wasn’t up to the task. So this is a long post about 9 months of printing.

For First Friday in December, I put together a 21-piece show.

About a third of those were printed before June – all gum prints. Some have a cyanotype base layer and some are pure gum. Most of them are 7 layers; at least one has 11.

While printing the prints from the Burning Man part of this series, I realized I wouldn’t have enough time to get good blacks for the night shots (I don’t mount my paper to sheet metal, so shrinkage and alignment are issues). I fell back to kallitypes, which I love, and which give fantastic blacks when toned with gold or palladium. Or, I presume, platinum – although I’ve not used platinum yet.

For those that haven’t been to Burning Man: it’s held on a dried lake bed, called a playa. The playa is ripped up somewhat by all of the people walking and riding around, and playa “dunes” form: piles of loose playa, which is finer than sand. It’s this “playa dust” that I wanted to use as the coloring for some of the prints of shots I took at Burning Man this year.

I figured that I could get the playa dust to stick with a gum bichromate process. And having printed with casein previously, I knew that it would substitute well for gum arabic and that casein would give me more “stick.” So, casein bichromate with playa dust. It didn’t take long to get it to work, and four of the prints in this series were printed using this method.

Once I started printing with casein for the playa shots, I wanted to do more with it. Several of the prints are color casein bichromate. A few more started out as casein prints, but weren’t working out and were abandoned (I have two copes of “Firework Man” that are 5-6 layers of casein bichromate, and just weren’t heading toward black the way I wanted).

Along the way there were a few interesting bumps on the road.

Paper: I printed on five different papers, mostly owing to what I had in the house at the time. Stonehenge Rising white; Stonehenge Rising warm white; Rives BFK; Ruscombe Mill Herschel; and Ruscombe Mill Buxton. All are good papers. Rives BFK is my favorite for gum, while Herschel and Buxton are fantastic for Kallitypes (Buxton is a heavier version of Herschel and both are amazing). Stonehenge Rising papers tend to soak up too much water, and I often rip the corners accidentally while hanging them to dry (the weight of the water in them is too much for the paper’s fiber, especially after four or five layers). But it’s a good paper for the process and it’s significantly cheaper than BFK (mostly due to import fees, I’d guess).

Ammonium Dichromate: this is the chemical responsible for hardening the casein or gum arabic, when exposed to UV light. I print using an 8% solution. I was running low and ordered more – when it arrived, I mixed it up and, against my better judgement, combined it with older ammonium dichromate (figuring I was blowing through it at an amazing rate, and I’d use it all up anyway). Well, I accidentally grabbed the bottle of weak (3%) citric acid instead of the bottle of ammonium dichromate, didn’t read the label, and dumped one in to the other. OOPS. I had enough clues to guess at the volumes I combined, and I believe the resulting mixture is about 7% ammonium dichromate, and well less than 1% citric acid. I had to recalibrate my printing process (less dichromate means lower contrast prints with shorter exposure time, and the citric acid didn’t have any significant affect on the process) but suffered no ill effects.

Sizing: my gum (and casein) papers are usually gelatin sized – twice – and then hardened with glutaraldehyde. Glut is nasty stuff. I’ll only do this outside, and let the paper hang dry for at least 8 hours outside before I bring it inside to sit in my fume hood for a couple of days. So when I ran out of sized paper in mid-November, I needed to come up with a backup plan. And that was Gamblin PVA sizing. I had used this stuff in early 2011 when trying to print gum over an inkjet print, and found it a bit of a mixed bag; it sized well and quickly, but it’s vinyl. It’s slippery. Getting watery emulsions on the page after sizing is tough, which means cyanotype printing on paper before sizing; then PVA sizing; and then gum printing layers on top. I want to do some more head-to-head testing before I completely give up on gelatin sizing, but it’s looking like PVA can do almost as good a job with a lot less hassle.

Fumed Silica: simplifying the story a bit: in 2011, a platinotype printer (Dick Sullivan) found that pre-treating paper with fumed silica increased the density of the final print (read: made it more black). Since kallitypes can wind up chemically identical to platinotypes if done properly, I wondered if we could do the same to a kallitype. I did some testing mid-year with various kinds of fumed silica, and the short answer is: yes. The four prints for this show used fumed silica (specifically, Aerosil 380). There are dozens of types of fumed silica out there, so I have more work to do here.

And here are all of the final prints, photographed as framed and hung, as well as copies of the artist’s statement hanging through the show. Click on the images to see each.