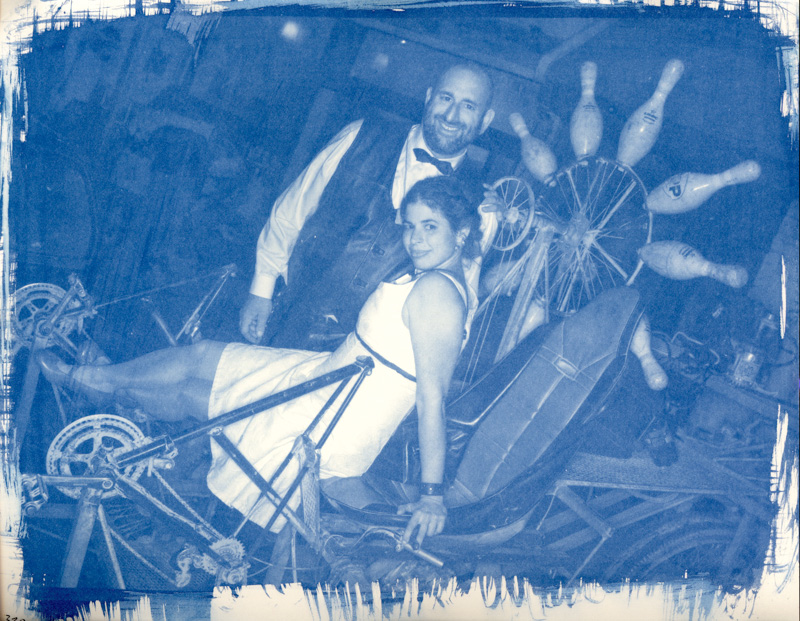 I enjoy printing cyanotypes: simple chemistry, simple reactions, nice deep blues, non-toxic, and the moment you drop it in water is dramatic. It’s very straightforward and difficult to do wrong – it just takes a long time to expose a print properly, and under-exposing leads to the bad sort of drama.

Back in 2011, I was discussing cyanotype chemistry with Mike Ware (inventor of the Cyanotype II process, which I’ll write about some other time, no doubt). For a project I was working on at the time, I needed the exposure times to be faster. Mike said something that I found really interesting:

Oh my, that’s exciting! Let me say it differently: the ferricyanide in cyanotype chemistry (potassium ferricyanide) prevents a significant amount of UV light from reaching the light-sensitive compound (ferric ammonium citrate). Why is that interesting? I’m glad you asked, because now I’m all fired up to write about it.

A quick disclaimer: while I have passing knowledge of chemistry and can have somewhat intelligent conversations without making an obvious ass out of myself, my knowledge is not very deep. I’ve probably got some glaring errors in the details here, but I’ll represent them as best I understand them.

Traditional cyanotypes are made by mixing a 20%-ish solution of ferric ammonium citrate (“cyanotype part A”) with an equal volume of 8%-ish solution of potassium ferricyanide (“cyanotype part B”). When the ferric ammonium citrate (that is, Ammonium Iron(III) Citrate) is struck by UV light, the iron reduces from Iron (III) to Iron (II); and when the (liberated?) iron is mixed with potassium ferricyanide, prussian blue is formed.

The magic in cyanotypes jumping off the page when they hit the water (rather than when the UV light hits the paper) lies in the fact that the UV exposure happens to a (mostly) dried sheet of paper. The ferric ammonium citrate exists as an iron donor; the ferricyanide combines with the Iron (II) when exposed to water, and thus prussian blue forms in any area that was exposed to UV light. There’s no water in the paper when it’s exposed (unless you’re impatient like I am, or live in an area with high humidity like I do), so the compounds sit on the page until it’s immersed (“developed”) in water.

Well, then, instead of developing it in water – we’ll just develop it in potassium ferricyanide. The image on the paper is full of Iron (II), which should readily combine with the ferricyanide and form prussian blue.

Wait, does that work?

Yes! Yes it does. As Mike pointed out to me in conversation, it can be a bit wasteful of the potassium ferricyanide, so you’d need a good reason to float the paper in a bath of potassium ferricyanide. You could probably re-use that potassium ferricyanide “developer” on many prints (until it’s exhausted), but I haven’t tested that, and I don’t know what its shelf life would be at that point. Or, you can be more frugal and brush the ferricyanide on to the page like I did in that video; just be careful re-using the brush, since it will wind up with insoluble prussian blue on it. You’re probably sacrificing some depth of penetration, though, which makes the image more prone to floating off the page in a subsequent bath.

For comparison: here are two prints, made with the same negative and at the same exposure time (20 minutes). The first was made using the traditional technique, combining A and B; sensitizing and drying the paper; exposing; and then washing in vinegared water.

It’s somewhat under-exposed at 20 minutes; there’s no detail in the dress or shirt sleeves. Compare it to the second, made with the same chemicals, negative, and exposure time but using a 2-part application: 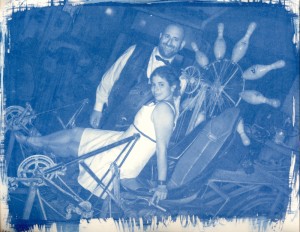 Much better tonality, and clearly a better exposure; there’s detail in both their faces and clothes.

As you can see, the result generally matches Dr. Ware’s supposition: that could be 2 or 3 stops of difference. Appropriately modifying the exposure time, you could probably wind up with the same print. That’s a huge difference when you’re talking about taking what had been a 1-hour exposure, and turning it in to a 15 minute exposure!

Curious? Try it out yourself: coat a piece of paper with 20% ferric ammonium citrate. Let it dry for at least 30 minutes. Place your subject on it and expose it to UV light appropriately. With a brush, apply potassium ferricyanide to the paper. Wash in plain water briefly and see what you wind up with!