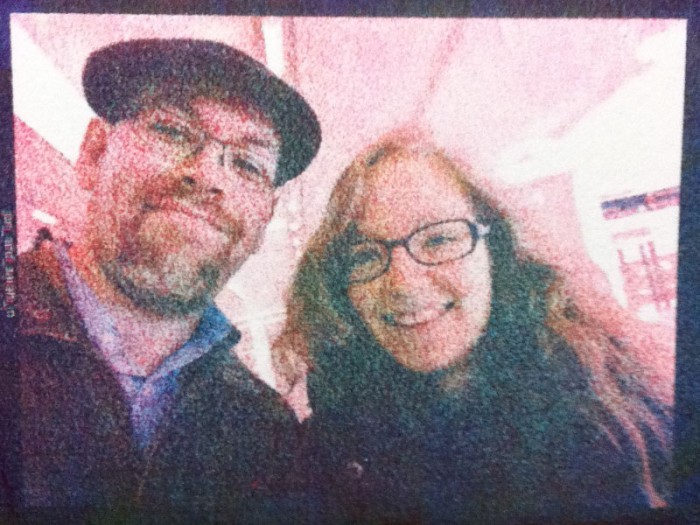 Following up on my earlier post on The Chiba System, results on that final print were mixed. From a distance it looks somewhat reasonable: 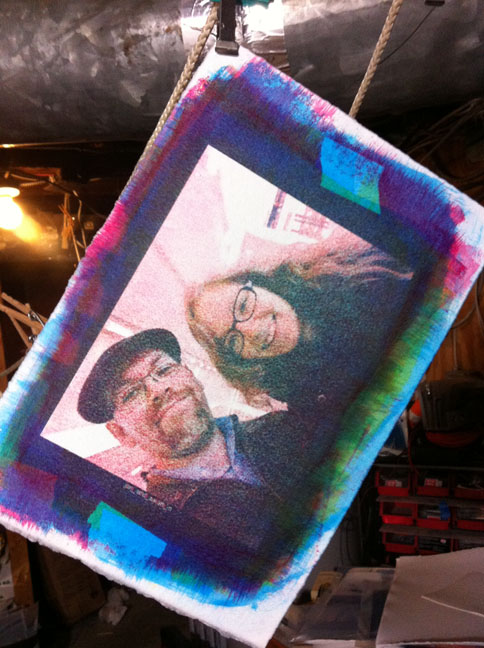 … but once you get up close, you’ll see that something odd happened: 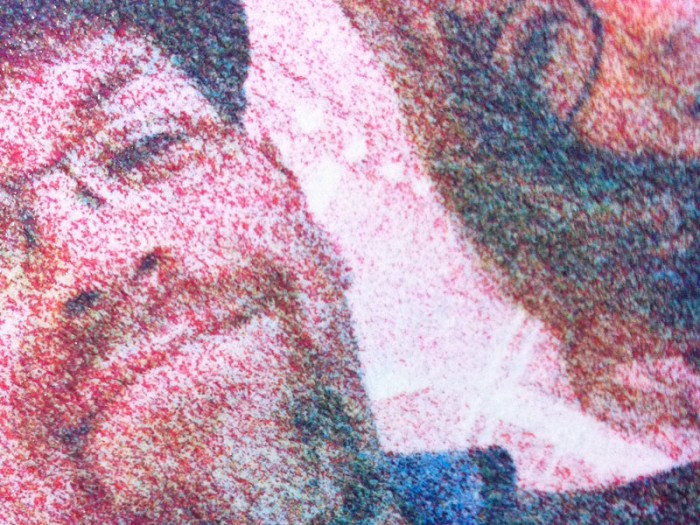 It looks to me like each additional layer in this 7-layer print pulled the pigment below it in to tighter and tighter globules. I can’t really explain how that happened; the globules clearly gained density, which means they must have built up; perhaps the spaces between those globules wore down. I can’t imagine that the pigment that had been in the clear areas actually moved.

I have three theories as to what might be causing that spottiness.

1. The sizing. I sized this print with PVA sizing. I find it easy to work with, and I thought it a quick improvement to the Chiba system as described in Halvor BjÃ¸rngaÌŠrdâ€™s 2007 paper. BjÃ¸rngaÌŠrdâ€™s approach was to re-size with gelatin between each layer; as he describes it, each layer of sizing is washed away with the following layer of printing, and therefore must be re-applied each time. (This makes some sense, as gelatin is being melted away from the highlight areas, and of course the sizing would be subject to this as well.) I figured there were two ways around this: one, lay down a layer of gelatin with hardener, so that it wouldn’t be washed away; and two, use PVA. I’ve used PVA successfully on many gum and casein prints, so I went in that direction. Perhaps it interacts with the chemistry poorly.

2. Dampness. One of the traits of Chiba that I’ve been quite happy with is how quickly one can prep and print a layer. Gum takes about as long to sensitize and expose, but also takes 30-60 minutes to soak after each exposure. Chiba is exposed to hydrogen peroxide for a second, and then washed in hot water for no longer than a minute. Not only does that save 30-60 minutes of soaking time but it also means the paper is less wet, and takes less time to dry before the next layer can be started. All told, that means I can lay down 3 or 4 Chuba layers in the time that I can do just one gum layer. But perhaps I’ve been rushing it too quickly, and the paper hasn’t been completely dry between layers. BjÃ¸rngaÌŠrd specifically mentions:

It is important that the paper is as dry as possible before coating the photosensitive solution, as a humid paper surface may lead to staining.

3. The washing. For most of those layers, I did what BjÃ¸rngaÌŠrd said – ran the print under hot water to clear it. But, just like gum printing, that’s awfully aggressive and kills the highlights. I wonder if it also pulls the lower layers off where they weren’t stuck very well, leaving all of the top layers vulnerable to a poor bottom layer’s adhesion.

So, more testing: I’m running test prints that use variable sizing (PVA only, PVA + gelatin, PVA + double-gelatin). I’m letting each dry for at least an hour after sizing or coating, and at least two hours after developing; and the develop/wash is done by floating the prints in hot water (30 seconds per side). I’m hopeful that, with these variables under control, I’ll be able to tell whether or not the sizing plays a part (and also with the control PVA-only print, I should be able to see whether the dampness or washing played a part in the first printing).

5 thoughts on “The Chiba System, Part 2”