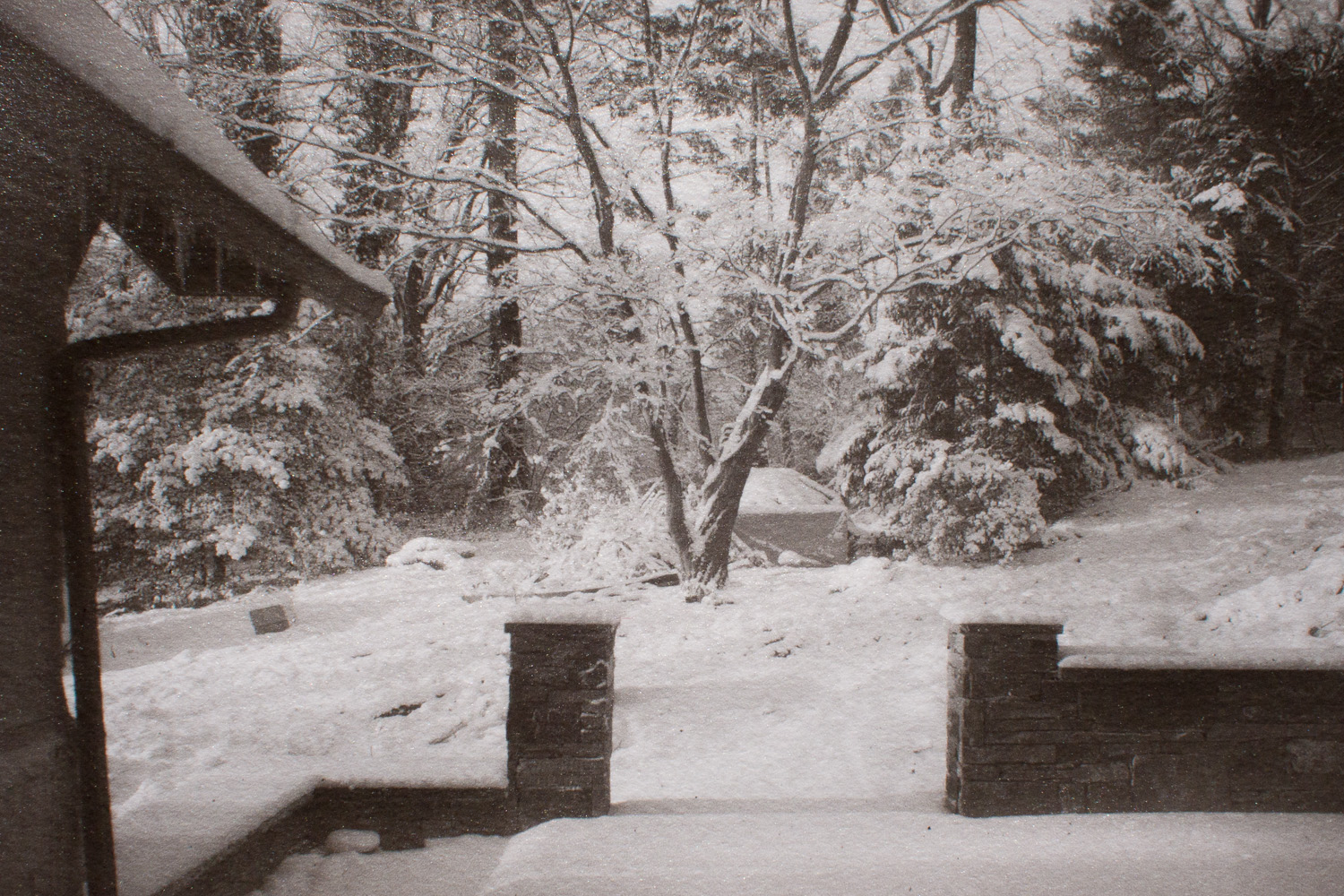 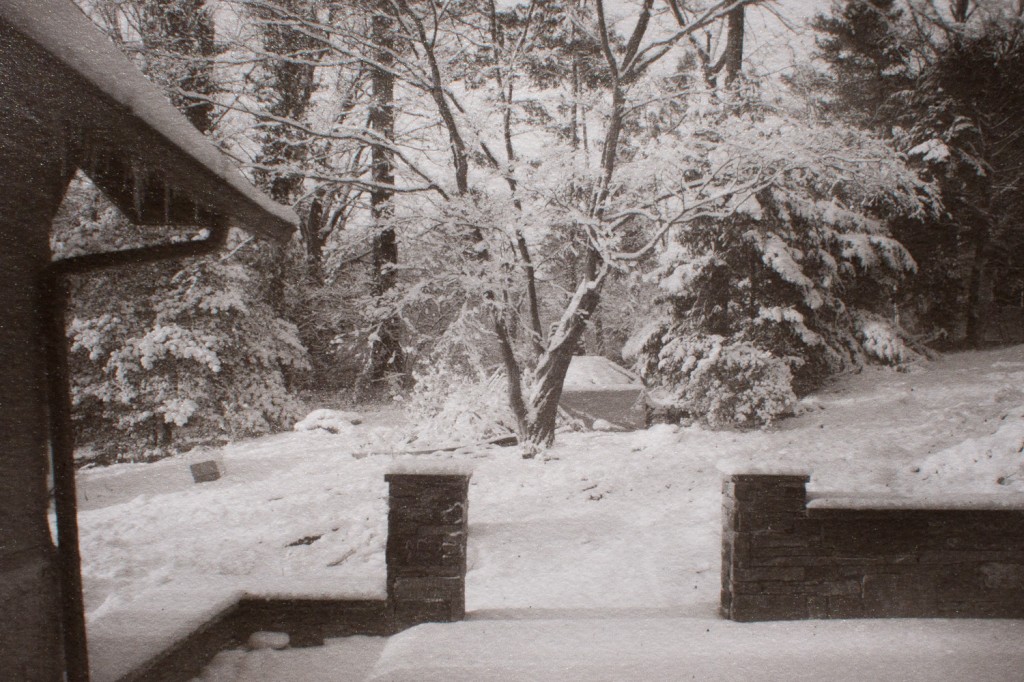 Well, I finally gave in. I’ve avoided doing any carbon printing for years now. From everything I’ve ever read, Carbon Printing is a fickle beast. It likes a clean, orderly way of doing things. It likes things done slowly and methodically. It likes precision and perfection. It just doesn’t seem like a good fit for my teensy basement dim-room, where I have a billion things happening at the same time. And, sometimes, the laundry too.

But this year, I’ve been looking at less-toxic printing. Chiba hasn’t been panning out the way I want, and it was my best guess for a process that would replace gum printing for me, replicating a lot of the feel and eliminating the (toxic and carcinogenic) dichromates that are in almost every process I use. My next option is to work with DAS (CAS 2718-90-3, 4,4′-Diazidostilbene-2,2′-disulfonic acid, disodium salt, tetrahydrate, aka “DAS”).

DAS is significantly less toxic than dichromate. For the past few years, many alt-printers have been experimenting with DAS as a replacement for dichromate in carbon printing. So, before I start going down the DAS road with carbon printing, I figured it would behoove me to figure out how to print with carbon the traditional way. Which lead to the 3-day printing extravaganza which resulted in exactly one single-layer black-and-white print. 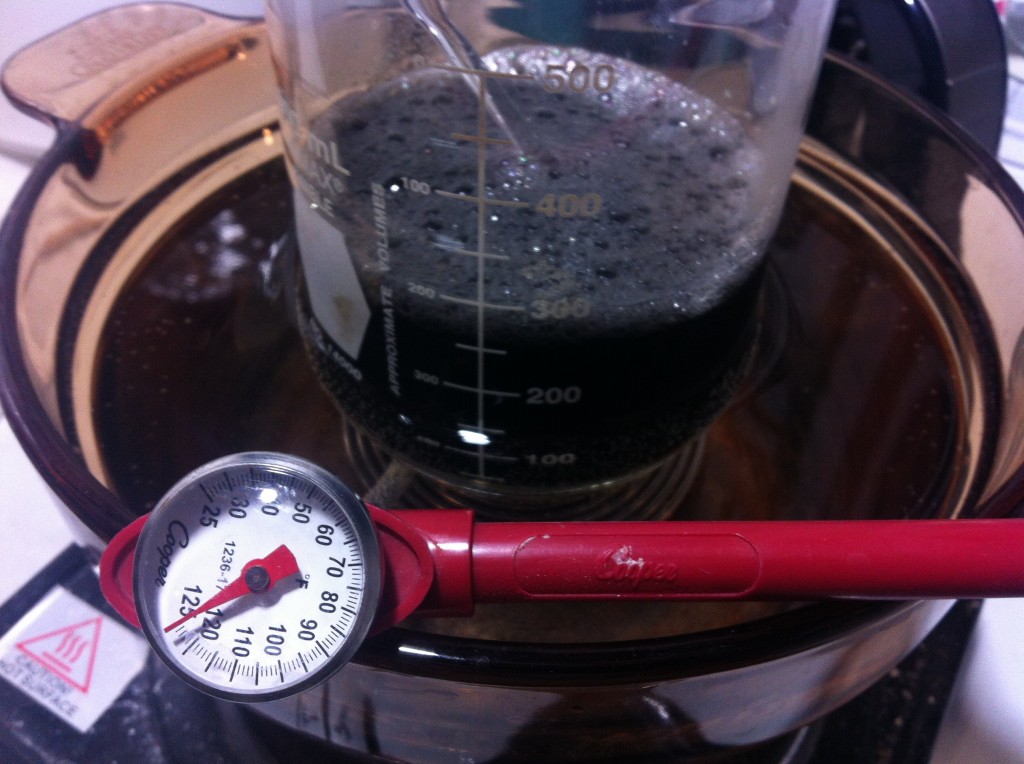 Carbon printers call their base material “glop.” It’s gelatin with pigment, along with a plasticizer (sugar) to keep the glop from cracking and a humectant (glycerin) to help it in more arid conditions. Once made, it rests (heated) for a couple of hours, so all of the air bubbles work their way out. 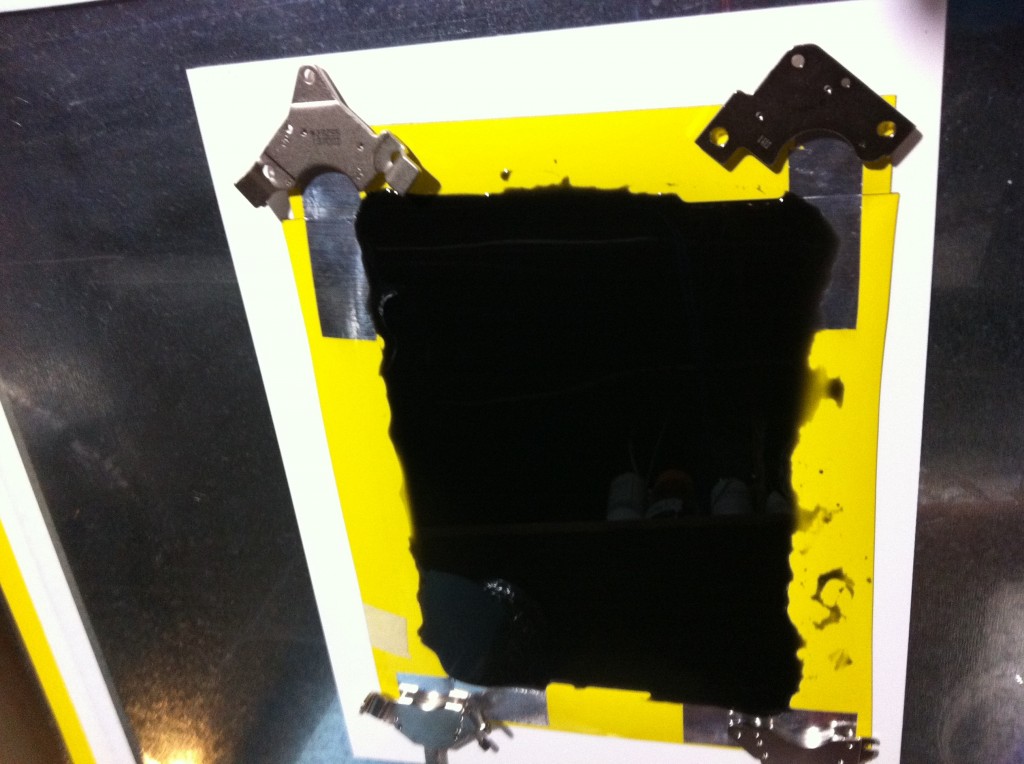 The glop is poured on a temporary support (paper) and dried; in my case, it took about 37 hours to fully dry. The result is called “carbon tissue” for reasons that I don’t really comprehend. 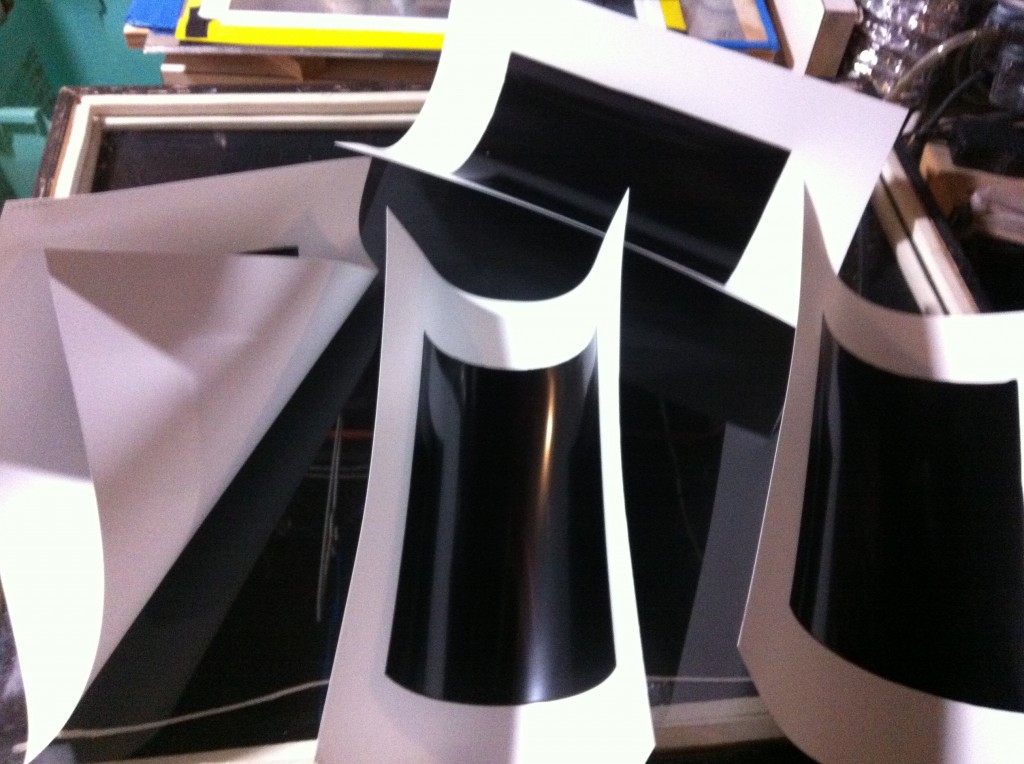 The tissue itself isn’t light sensitive; it’s just the raw material that you’re going to harden with something. The traditional methodology is to prepare a tray of dichromate and soak the paper in it – I hate that idea. Too much dichromate. So I went with the more miserly “spirit sensitizing” where a weak dichromate solution is mixed with acetone, and then brushed on to the tissue. The tissue is then hung in a dark box for 2-3 hours to dry.

UV light has now selectively hardened the top of the carbon print (where the negative allowed). But as the dichromate hardens the gelatin, less UV penetrates, and therefore doesn’t get all the way down to the bottom of the dried glop.

Step 5: move the tissue to its final support.

By “support” I mean “paper” in this case. You take your exposed tissue, briefly soaked in cold water, and “mate” it to a new support paper which has been sized and hardened (such that gelatin will stick to it, and also such that the sizing won’t melt in hot water). Basically, pull them out of the water together (with the tissue in the middle), remove excess water (I used a squeegee), put a plate of glass on top and weigh it down. The two are firmly pressed together for a half hour. 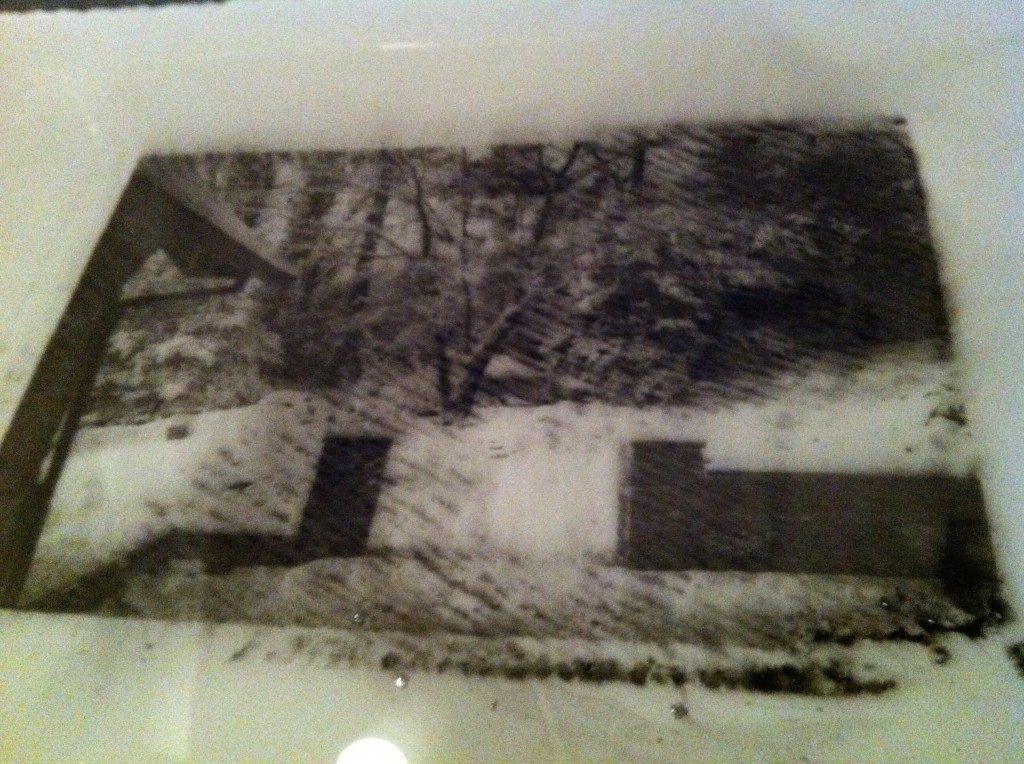 Finally. The mated tissue and new support paper are immersed in hot (110-ish degrees F, somewhere around 40 degrees C) water; and, after a minute or so, the tissue backing is carefully peeled off, revealing the opaque glop. The gelatin (which hardened in the UV light) attached itself to the sizing on the support paper, and the hot water dissolves whatever hasn’t been hardened (over a few minutes), leaving you with the final print. Mirrored left-to-right, because you just flipped it from its initial (tissue) support to another (final) support.

On the back patio, which is in the foreground covered with snow in this picture. Just let the print dry. 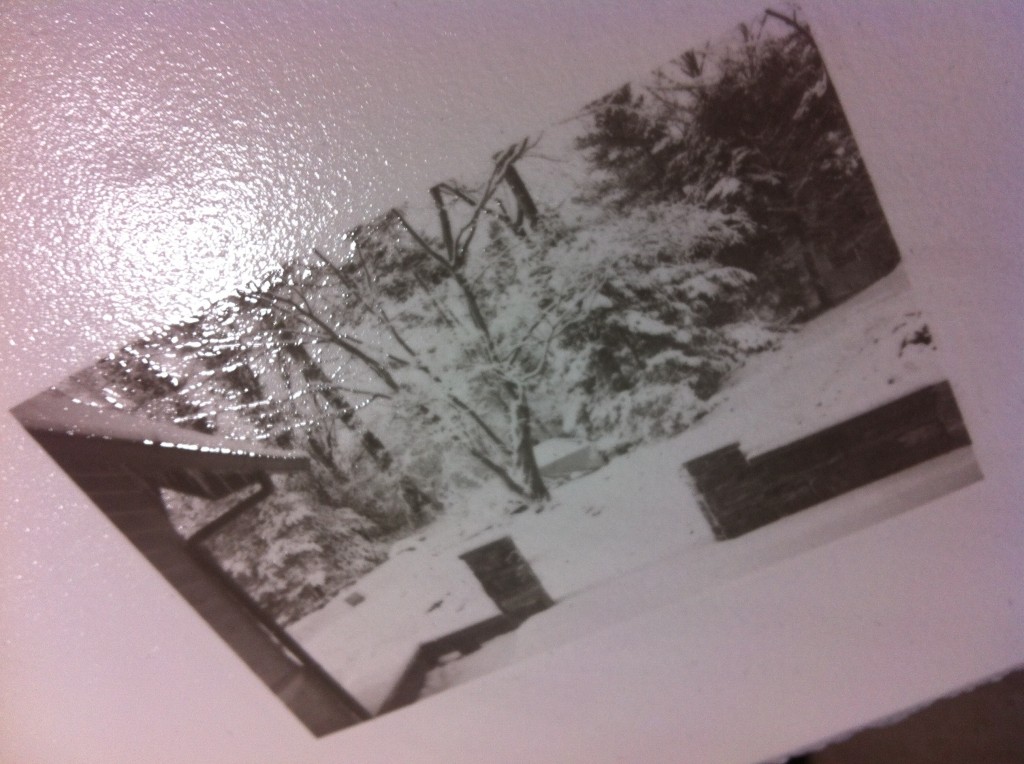 Next, I want to see what color will look like. And to do that, I have to explore two new things: first, I’ll have to stack them up on top of each other while wet and totally opaque, so I’m hoping to build a cheap pin-registration system out of some 3-ring hole punches. And second, I’ll be using a double-transfer method, which will be much more laborious than the single-transfer I’ve been doing – basically Step 5 puts it on a temporary support, and then you dry it and transfer it to a final support again at the end. Or so I’m lead to believe.

Oh, and I forgot to mention the alternate “Step 7a: curse,” for when you’ve forgotten to harden the sizing on the final support paper and you watch the print literally run off the page after you pull it out of the developing water: 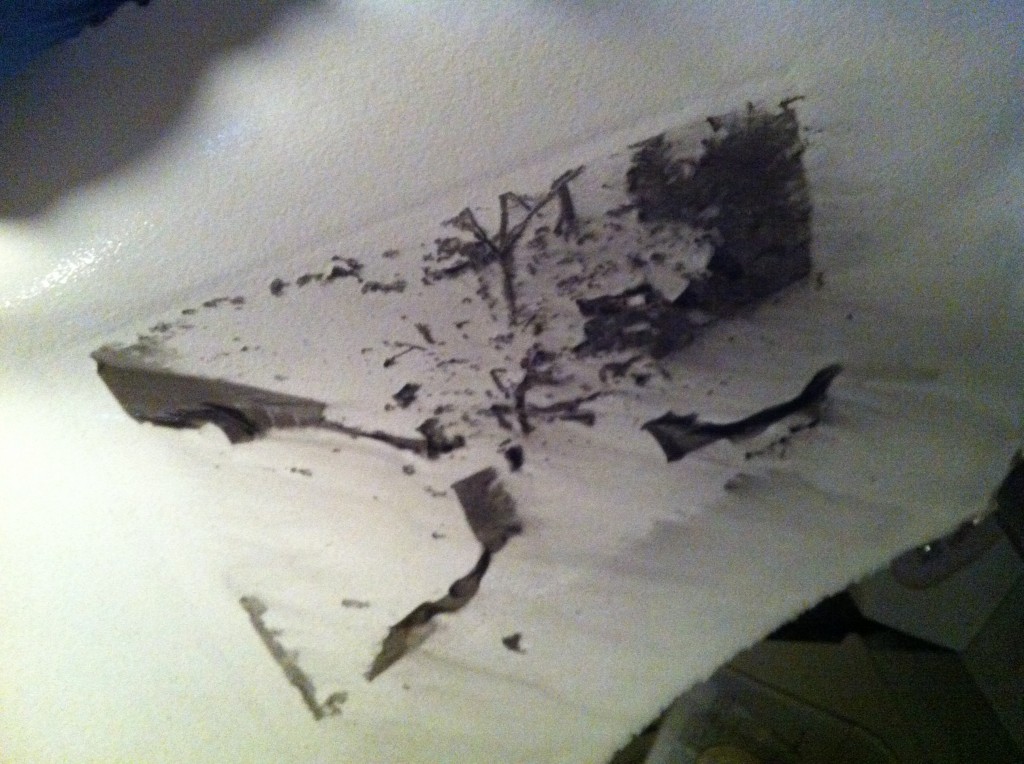