In the last few days I’ve gotten two questions about printing on glass. What a fantastic coincidence! It must mean it’s time to write about it here. 🙂 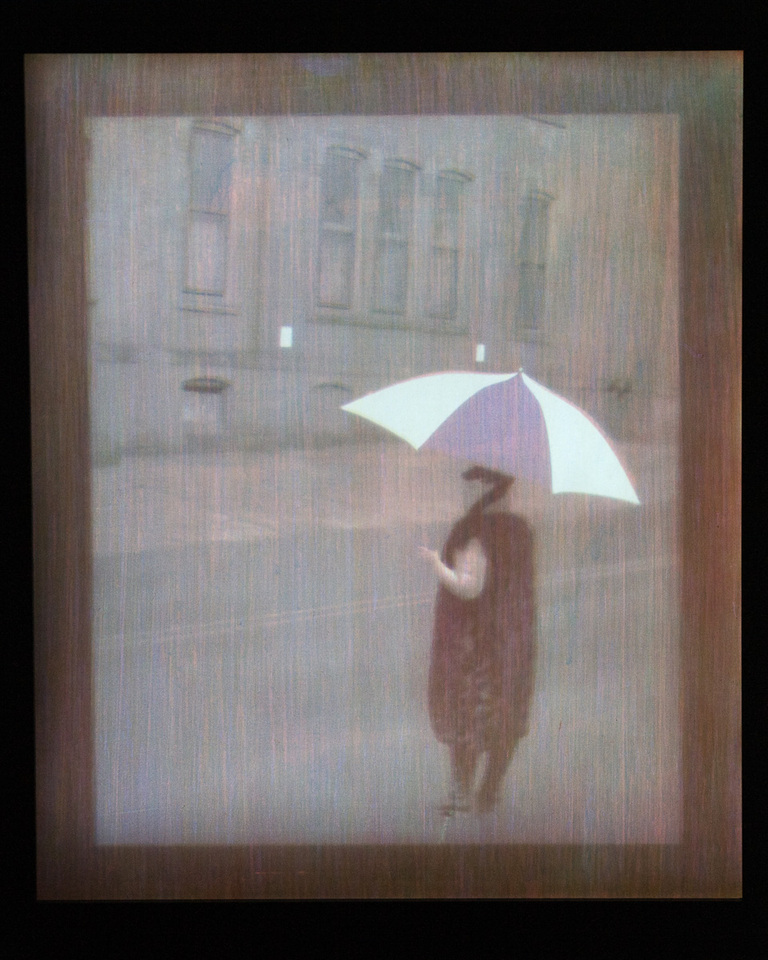 I started printing on glass because I wanted big transparencies. Developing slides might be time consuming and difficult (an hour of keeping chemicals at 120 degrees F? Sigh) but pulling the slides out of the final rinse is pleasing like few other processes. You get to instantly take in the scene in full color positive. It’s a great feeling to see a fantastic exposure at that moment. I wanted to find a way to make those images, but bigger. And preferably without the whole C-6 slide film developing process, which is boring, smelly, tedious, and leaves no room for creativity or improvement.

I’m not sure what I came up with really met my initial goals, but it certainly produced images that I really like.

First of all, I had read that it was possible to print gum on glass. I read that you had to sub it with gelatin first. Or that you had to scrub it and bake it. Or that it was impossible to print on. Or one of a dozen other variations. So I tried many of them, and found that – short of etching glass with hydrofluoric acid, or as I’d find out later, sandblasting the glass – it was nearly impossible to print gum on glass. It just doesn’t stick very well, and while it’s possible, I found it too tedious to get my workflow together without help from someone that had done gum on (transparent) glass before. Instead, I turned to casein.

Casein, it turns out, sticks to glass like nobody’s business.

Over a few months I worked on my technique; calibrating printing curves for negatives, figuring out how to best work the casein stick to the glass, determining pigment-to-casein ratios, and trying to understand the dynamic C-M-Y color balance (have I mentioned that I’m red-green color blind?). The resulting process first gave me “She Drank a Little Whiskey,” above.

After the first print and while I was printing a dozen other casein glass prints at breakneck speed, I went looking for other gum and casein printers working on glass to try to find ways to improve what I was doing. I found Sarah Van Keuren (conveniently located in Philadelphia!) and she pointed me at Sandra Davis, who was showing some of her very impressive gum-on-glass work. Sandra is the one that keyed me in on sandblasting glass before printing gum on it. The final prints are very ethereal, having a frosted glass texture along with the gum print (as usual, any digital reproduction of her work is a terrible likeness and doesn’t capture the beauty of the print, so imagine what’s on her web site but a billion times better). While that’s a great effect, and I’ve subsequently found other gum-on-glass printers talking about sandblasting being the way-to-go, it’s not what I was aiming for; I set that knowledge aside for the moment and continued with the casein process I was still honing.

Let me dive deeper by first discussing printing casein bichromates. This is fundamentally the same as printing gum bichromates, the difference being that you don’t use gum arabic. Instead, mix with a magnetic stirrer:

* 10g of casein powder
* 100ml of store-bought ammonia (ammonia + surfactant; make sure it has no detergent added)

Cover it well and let it stir. It may take an hour to fully dissolve. And it’s better if you let it sit in a sealed container, after being thoroughly mixed, for about 8 hours (although I have used it immediately with little difficulty, by drawing from the bottom of the container).

Now, there are casein printers that will tell you that you don’t have to seek out specialty casein powder; you can instead use non-fat cottage cheese. And while I’m sure that’s true, I decided I wanted to start with something that would be very consistent from batch to batch. I bought a big bag of casein powder from Earth Pigments (a link which I’m sure will eventually fail but remain immortalized in webby grandeur; at least it works as of this writing). When it arrived I put it in a clean glass jar, from which I’ve been scooping it ever since.

Either way, you wind up with ammonium caseinate. If you’re already familiar with gum printing, just substitute the ammonium caseinate for gum arabic; everything else works the same way. You will find that your exposure times are different, and that the casein will stick much more readily to anything. It also dulls colors a bit (compared to gum).

A few words on difficulties I had when trying to use this on glass.

It was hard to determine the best exposure time, because exposures were fairly short. At the time I was printing gum using an 8% (w/v) ammonium dichromate solution, so I used the same for casein. I found that switching to a 16% potassium dichromate solution gave me much more control and more consistent results.

If you know anything about the solubility of potassium dichromate, then you may have raised an eyebrow at that concentration. At the start of this process it was fall, and I was mixing potassium dichromate on demand – my dimroom was relatively warm, and I was heating the dichromate to dissolve it anyway. As I worked on casein through the winter, I started using larger stock solutions of potassium dichromate and the temperature in my dimroom fell under 50 degrees fahrenheit. Eventually I realized that the odd crystallization problems I was seeing on many plates was due to the dichromate coming out of suspension as it became colder, particularly while it was just starting to dry on the plates.

If I were starting over, I would recalibrate with a lower concentration of potassium dichromate (10% would probably be better). Since I was in the middle of a dozen prints (which means some 12 dozen panes of glass in addition to the 12 custom-curved negatives), I didn’t want to do that; instead I dropped a magnetic stirring bar in the bottle of potassium dichromate. I stared every printing session by warming the bottle (105 degrees F, 40 degrees C) and then sticking it on my magnetic stirrer to bring it back in to solution, using the warmed solution in my prints for the day. When I returned to casein months later, those prints were done with 7% (w/v) ammonium dichromate (which was much easier to calibrate after having successfully printed many potassium dichromate sensitized plates).

There are two other notable issues that I had with casein on glass: adhesion, and multiple layers.

While I say that casein sticks to glass like nobody’s business, I’m comparing it to gum. A good workflow that I found was to put a controlled (measured by syringe) amount of sensitized and pigmented ammonium caseinate on a glass plate, brush it in alternating directions (very lightly!) for 10 seconds, and then let it set for 30 seconds; pick up a new (clean, dry) foam brush and repeat until just before the brush was ready to squeak on the glass. (It’s a point you begin to recognize after you’ve passed it many times.) Then I would put the sensitized plate in a light-proof drying cabinet (with good air flow) for at least 30 minutes before exposing it to UV. Plates prepared this way virtually never floated off the glass. They stuck well. If I went for a thicker pour without so much brushing down, it wouldn’t stay on the glass; it would come off in the wash, just like printing gum on glass. And yes, this is the reason that the print above is streaky (which works really well with that image, making it feel like it’s still raining; I made sure to deliberately pick my final brush stroke direction on each pass).

When I tried printing multiple color layers on top of each other, I found that each subsequent application would wash away the detail of the layer before it. So while it is possible to make a full color casein print on a single pane of glass, that print will have very high contrast and low detail. I decided to avoid that problem by printing each pane of glass twice – one on each side of the pane of glass – and then stacking multiple panes of glass with different color layers. This gives my casein glass prints a very interesting parallax effect, where the layers will align precisely only from one viewing angle. I find it very pleasant, and it’s an interesting exercise to change the order of the color layers to see how it affects the final presentation.

One significant advantage of this method is that you don’t have to register the negatives multiple times; I cut the negatives to the same size as the panes of glass, always aligned the negative against one specific corner of the panes (their size varies up to a sixteenth of an inch because of the cutting process), and then didn’t think about the overall registration until I began to frame the 3 to 6 panes as a final print.

My favorite part of this printing method is the quickness of each layer. Unlike printing on paper, the glass obviously doesn’t absorb any of the water (or the emulsion). After the 30 minutes in a drying cabinet, there’s the exposure (which for me was around 6-10 minutes); then an incredibly short wash (less than a minute, typically); a rinse in distilled water (to avoid mineral spotting); and then final drying (which could be done with a hair dryer in less than a minute). At that point you can immediately re-coat the back of the plate and put it back in the drying cabinet to prepare for the next layer. Typically my workflow would be to sensitize four panes of glass at once. It was unbelievably fast, limited mostly by my ability to keep straight what I was doing next.

I hope that’s all useful to the people that are interested in this process. As always, I’ll gladly answer questions that arise. Happy printing!

One thought on “Printing Casein on Glass”