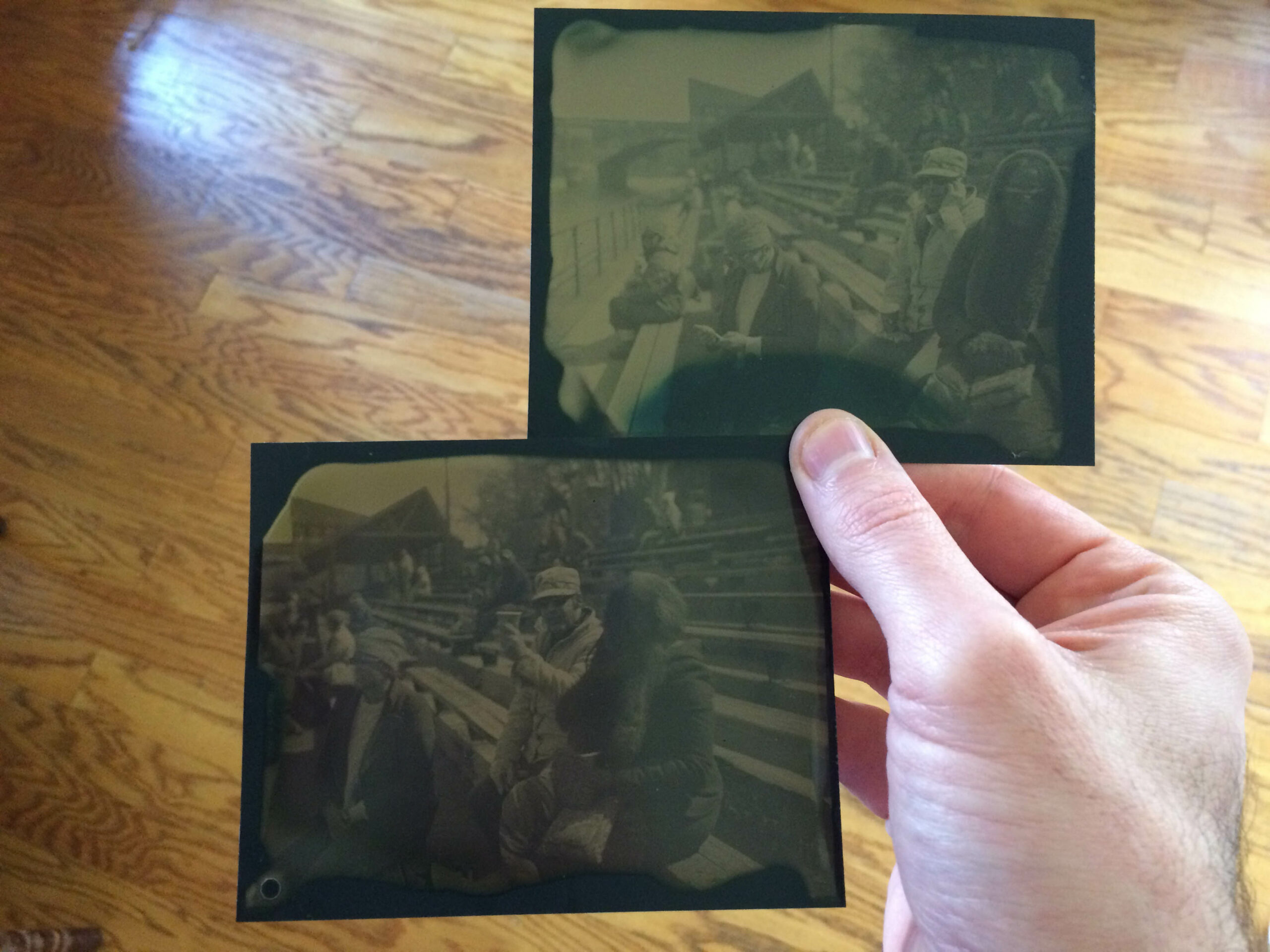 Apologies for this being a little rambling and unfocused – this has been sitting in my queue since 2016! Time to pull together the details I’ve forgotten and get this draft out the door…

Back in 2013, I posted about [dry plate tintypes] using Rockland Colloid emulsions. Earlier this month I revisited the recipe for developer that I listed there:

Well, I mixed up a fresh gallon of Dektol; took a liter and added about 33g of Ammonium Thiocyanate to it; and it didn’t work. I soaked some Liquid Light plates in that for a looong time (much longer than the 2-3 minutes it should need), and still nothing. Some head-scratching ensued.

Fast forward a few weeks, and in 2015 I gave it another go. I found two interesting things:

1. Dektol, mixed two weeks ago, has changed from clear to a light brown-yellow color. But it’s still good Dektol.

2. The same recipe that seemingly failed when the Dektol was totally fresh… now works.

There are a few possibilities, and it will be some time before I figure out which actually happened.

It’s possible that partially oxidized Dektol just plain works better for dry plate tintypes. Phrases like “it’s better after it’s been used” or “it’s better after it’s ripened” are common in recipes for wet plate work. Perhaps there’s something to it for dry plate tintypes? If so, there must be some second source of magic in the Rockland Colloid tintype reversal developer (the first source of magic being ammonium thiocyanate – and read on for the magic).

I thought it might also be possible that I had tested the Dektol with Ag+ and not LL, and perhaps this homebrew developer only works with Ag+ (which turns out not to be true, but it was a possibility).

But frankly, I think the answer is more fundamental: I think I coated this batch of LL plates too thickly.

It had been about a year since I coated any plates at all; my dim room is about 60 degrees Fahrenheit; and I’d been experimenting with new coating strategies as I try to move from medium format tintypes (which do have an awesome look to them – like mini polaroids, since they come from a square format TLR!) to large format 4×5. All of these made for challenges in getting the coating correct – perhaps I should post on this, since I’ve tried several dozen coating strategies since 2013! – but suffice it to say, for now, that if the emulsion doesn’t look a ghostly thin gray when it has dried then you’ve put on too much.

Looking back at some old coated plates that I have sitting in storage, it looks like almost all of the plates I’ve coated with Ag+ are too heavily applied. Which, now that I’m looking at the developer and paying attention to the emulsion itself, seems like it might be a large part of why I have so much trouble with Ag+; now that I’m aware of it, perhaps it will work out better? Who knows.

So, with this homemade developer not very reliable, I tried a well-known reversal developer:

… which developed fine, but did not reverse at all. At the time I didn’t understand how film reversal works, and now that I do, it makes sense why this didn’t work: you basically develop the film, then bleach off the developed area, and finally re-expose what’s left and re-develop it.

But finally, in 2016, a post from DonF on photrio.com gave me what I was missing:

We did a bit of research on how the Rockland “reversal” developer works. Apparently, the Ammonium Thiocyanate is the secret ingredient. It has a complex chemical effect on the developed silver such that very tiny “balls” of silver are formed in the exposed areas rather than tangled threads of metallic silver that form with conventional developer. The dimensions of the “balls” are on the order of the wavelengths of visible light, causing the exposed areas to render as light colored rather than dark. Ammonium Thiocyanate is commonly used in holographic developers so the interference pattern is preserved by the tiny sub-micron silver “balls”.

Reading through the thread some more, they break down the 3-part Rockland reversal developer in to: (a) straight-up Dektol powder, repackaged; (b) sodium sulfate; and (c) 41% Ammonium Thiocyanate solution.

Just this week I had some leftover Rockland chemicals from 2016, un-mixed (I’d used some of each instead of mixing up the whole batch and had leftovers). The “Part 1” powder had turned a rust-brown and was useless; the “Part 2” was a fine white powder just as before, and “Part 3” liquid looked unsurprising. So, I took a Dektol package I had sitting around, stirred up the powder as much as I thought reasonable, and mixed up, in this order:

… and it worked perfectly. Now if I had just gotten the exposure correct!